Scientific evidence demonstrates the diverse health-promoting benefits of the tenets of anti-aging medicine. How high can you ascend on the Anti-Aging Lifestyle 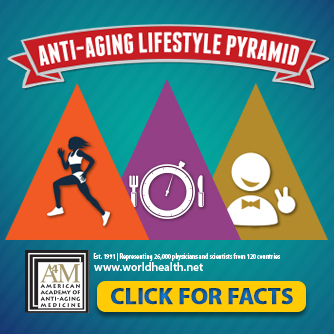 The goal of anti-aging medicine is not to merely prolong the total years of an individual’s life, but to ensure that those years are enjoyed in a productive and vital fashion. The clinical specialty of anti-aging medicine utilizes diagnostic protocols that are supported by scientific evidence to arrive at an objective assessment upon which effective treatment is assigned. Physicians who dispense anti-aging medical care are concerned with the restoration of optimal functioning of the human body’s systems, organs, tissues, and cells.

Using country-level data on deaths and risk factors and epidemiological models, the researchers estimate the number of deaths that could be prevented between 2010 and 2025 by reducing the burden of each of the six risk factors to globally-agreed target levels — tobacco use (30% reduction and a more ambitious 50% reduction), alcohol use (10% reduction), salt intake (30% reduction), high blood pressure (25% reduction), and halting the rise in the prevalence of obesity and diabetes. Overall, the findings suggest that meeting the targets for all six risk factors would reduce the risk of dying prematurely from the four main NCDs by 22% in men and 19% for women in 2025 compared to what they were in 2010. Worldwide, this improvement is equivalent to delaying or preventing at least 16 million deaths in people aged 30- 70 years and 21 million in those aged 70 years or older over 15 years. The authors predict that the largest benefits will come from reducing high blood pressure and tobacco use. They calculate that a more ambitious 50% reduction in prevalence of smoking by 2025, rather than the current target of 30%, would reduce the risk of dying prematurely by more than 24% in men and by 20% in women. The study investigators submit that: “If the agreed risk factor targets are met, premature mortality from the four main NCDs will decrease to levels that are close to the 25×25 target, with most of these benefits seen in low-income and middle-income countries.” [Kontis V, Mathers CD, Rehm J, Stevens GA, Shield KD, Bonita R, Riley LM, Poznyak
V, Beaglehole R, Ezzati M. “Contribution of six risk factors to achieving the 25×25 non- communicable disease mortality reduction target: a modelling study. Lancet. 2014 May 2. pii: S0140-6736(14)60616-4.]

University of Zurich (Switzerland) researchers submit that there are four lifestyle choices that can add years to your life. Eva Martin-Diener and colleagues assessed data collected on 16,721 participants aged between 16 and 90 years, enrolled in the Swiss National Cohort (SNC). Identifying the four main risk factors for NCDs as: tobacco smoking, an unhealthy diet, physical inactivity and harmful alcohol consumption, the researchers translated the consequences of an unhealthy lifestyle into numbers. An individual who smokes, drinks a lot, is physically inactive and has an unhealthy diet has 2.5 fold higher mortality risk in epidemiological terms than an individual who looks after his/her health. The study authors conclude that: “The combined impact of four behavioural [non-communicable disease] risk factors on survival probability was comparable in size to a 10-year age difference.”
[Martin-Diener E, Meyer J, Braun J, Tarnutzer S, Faeh D, Rohrmann S, Martin BW. “The combined effect on survival of four main behavioural risk factors for non-communicable diseases.” Prev Med. 2014 Jun 2. pii: S0091-7435(14)00189-3.]

Indeed, the tenets of the anti-aging lifestyle have clear and wide-ranging health benefits, including:

• Combat cardiovascular and cancer risks: A study by a separate team from Northwestern University found that those who maintained goals for six or seven of the cardiovascular health metrics had a 51% lower risk of incident cancer, as compared with those meeting no goals.
[Laura J. Rasmussen-Torvik, Christina M. Shay, Judith G. Abramson, Christopher A. Friedrich, Jennifer A. Nettleton, Anna E. Prizment, Aaron R. Folsom. “Ideal Cardiovascular Health Is Inversely Associated With Incident Cancer: The Atherosclerosis Risk in Communities Study.” Circulation. 2013;127:1270-1275, March 18 2013.]